Traffic was formed when Steve Winwood, who was the focal point of the Spencer Davis Group
(see Spencer Davis Group), decided to move beyond the restrictions of the group
and form his own band consisting of other Birmingham area musicians.
Guitarist Dave Mason had been a member of the Worcester group The Hellions
in the early 1960s along with drummer Jim Capaldi (see The Hellions).
Jim Capaldi had continued with The Hellions who were re-named Deep Feeling
after Dave Mason’s departure and to help pay the rent,
Dave worked as a roadie for the Spencer Davis Group.
Saxophone/flute player Chris Wood who was born in Harborne, Birmingham on 24 June 1944,
had been a member of the group Locomotive and previous to that,
had been in Sounds Of Blue who later became Chicken Shack.

The four musicians would often get together on stage at a hip club called The Elbow Room
on Aston High Street in Birmingham and it was there that the idea for Traffic was formed.
With Dave Mason and Jim Capaldi eager to form a new band,
Steve Winwood agreed to join the partnership along with Chris Wood
and so the four retreated to a secluded (and reportedly haunted) cottage in Aston Tirrold, Berkshire
in order to write and rehearse new material.
The cottage was to become a place of legend as regular visitors included musicians such as
Eric Burdon, Pete Townshend and Eric Clapton as well as
Trevor Burton (of The Move) amongst many others.
The new group was named Traffic (an action that prompted an obscure south London band
called Traffic Jam to re-name themselves Status Quo)
and was given full financial backing by Island Records boss Chris Blackwell
who intended to promote the band to help the launch of Island Records as a major act label.

With Steve Winwood’s involvement, the group was assured at least initial success
and Traffic’s first single Paper Sun was released in the summer of 1967.
With production by Jimmy Miller and composed by Steve Winwood with Jim Capaldi
supplying the captivating lyrics, the song was just right for the times
and featured an Indian sitar played prominently by Dave Mason.
The single reached No. 5 in the charts and brought the group to the forefront
of the British psychedelic or “flower power” movement that was sweeping
the country at the time.

The next Traffic single was even more adventurous and was composed and sung by Dave Mason.
The song was supposedly inspired by a dream Dave had at the cottage
(although certain substances he was taking may have also played a part)
and the recording featured his innovative use of the Mellotron.
Hole In My Shoe became one of the most memorable songs of the 1960s
and captured the psychedelic atmosphere of 1967 with as much impact as
The Pink Floyd’s See Emily Play.
It also established Dave Mason as a major songwriting talent
with the recording reaching No. 3 in the British charts (years later, a version of Hole In My Shoe
was recorded by Neil from the hit BBC TV comedy show The Young Ones
with the song again making the top ten).

By November 1967, a third Traffic single entitled Here We Go Round The Mulberry Bush
had been released and was also used as the title track of a film which also included songs
by Steve Winwood’s previous band The Spencer Davis Group.
Traffic’s live shows at this time included a lot of on-stage jamming and improvisation
as well as extended solos by the individual members –
something quite unusual in Britain for a pop group in those days and an indication of things to come.

December of 1967 saw the release of Traffic’s first album entitled Mr Fantasy
which showcased the individual talents of the members and proved that
Dave Mason, Jim Capaldi and Chris Wood were more than just a backing group for Steve Winwood. The album also showed Dave Mason writing as a separate entity and indicated a clash of songwriting styles
with Dave Mason’s melodic and commercial compositions contrasting alongside
the more jazz-influenced songs of the other group members.

Possibly spurred by the success of Hole In My Shoe, Dave Mason left the group in December,
supposedly to begin a solo career, only to rejoin the band in May of 1968.
Traffic then recorded another successful self-titled album, to which Mason
contributed the classic song Feelin’ Alright, a composition that became much covered
by other artists but Mason left again in October of 1968 and a few months later, the group activities ceased.

Fearing the worst, Island Records released a “new” Traffic album called Last Exit
made up of leftover recordings, single B-sides, and some assorted live material.
A compilation entitled The Best Of Traffic was also released.
Meanwhile Steve Winwood teamed up with legendary guitarist
Eric Clapton and drummer Ginger Baker and along with bass player Rick Grech,
formed the much publicized and short lived “supergroup” Blind Faith.
When that group split, Winwood joined Ginger Baker’s new group “Airforce”
which at one time had also included Birmingham musicians
Trevor Burton (see The Move) and Denny Laine (see The Moody Blues).
Mason, Capaldi and Wood tried forming another band called Wooden Frog
but it was short-lived and had split up by March 1969.

In January 1970, Steve Winwood started work on a long-awaited solo album
and was joined in the studio by Jim Capaldi and Chris Wood.
The resulting sessions were so successful that Traffic was reformed minus Dave Mason
and the album produced from the recordings entitled John Barleycorn Must Die
was released as a group effort.
The album was critically acclaimed and became a big seller.

After enlisting top session players to the line-up, Traffic toured both the UK and the USA
where a live recording of their version of Gimme Some Loving
(originally recorded by Steve Winwood’s old band The Spencer Davis Group) made the charts.
Further Traffic albums were released in the early 1970s and were big sellers,
particularly in America where the group had a large following, but by 1974,
Steve Winwood, Jim Capaldi and Chris Wood were all concentrating on solo careers.
Chris Wood died from liver disease in July of 1983 at only 39 years of age.

Jim Capaldi released his first solo album in 1974 and scored a top five hit in Britain
in October of 1975 with Love Hurts.
He has appeared on recordings by many other well known performers
and has made several best-selling albums. Jim also occasionally collaborated
with his former bandmate Steve Winwood which included a Traffic re-union in 1994.
Jim Capaldi passed away on January 28, 2005 after a battle with cancer.

Dave Mason had moved permanently to the USA by the early 1970s
and established a successful solo career there which apart from making top selling albums,
included collaborations with Mamas & Papas singer Cass Elliot and occasional appearances
with the 1970s line-up of Traffic.
Despite battles with drugs and alcohol, he scored a big hit single in the States
with We Just Disagree in the late 1970s and continues to record and tour there
although he remains almost unknown in his native Britain
where he is remembered mainly for his contributions as part of Traffic.

Steve Winwood appeared on recording sessions for many well known musicians
throughout the 1970s and in 1981, began a predictably successful solo career.
His 1986 album Back In The High Life received a Grammy Award for Album of the Year in the USA
while hit singles such as Valerie and Higher Love have scored high chart placings in many countries.
Although Steve Winwood has not enjoyed such a high profile in recent years,
he remains a major talent on the world music scene and continues to record
and perform today in between spending time at his farm in Oxfordshire.

Traffic were inducted into the Rock And Roll Hall Of Fame in 2004.

With Special Thanks to
Copyright -© John R Woodhouse
Brum Beat 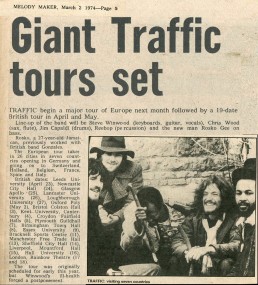