Ron Brinsdon has sent in this picture of a ticket stub of John Stewart playing at the Junction and these memories.

For many of us who are nearer 60 than 50, three of the greatest music magazines from our own heydays were “Zig Zag” covering the heady and formative years of all of the influential UK and US artists and bands, “Dark Star” concentrating on the West Coast sound and “Omaha Rainbow” which was mainly dedicated to the late and great John Stewart. Go and see any pub band or soloist who plays “Daydream Believer” and, unless you are a bit of a muso, when asked who wrote DB you would probably say The Monkees when indeed it was Mr Stewart.

JS was a guy who could regularly tour in the US and play 1,500 to 3,000 seat venues, particularly after the success of his double album “The Phoenix Concerts LIve” so it was all my birthdays together when he was playing what was then almost my “local”

Memory of dates etc fades and I managed to see JS quite a few times throughout the UK including the original Robin but that Junction gig has to be in my all-time top ten of ANYONE I have ever seen. If you know the man’s work you will (hopefully) get my attachment to the gig, if you don’t, try and check him out.

I know the gig was video taped but I have never seen a copy so many house-points will come your way if you could point me in the right direction! 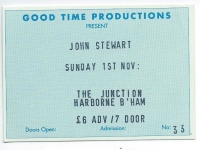