Steve Daly from Street Crocodiles and Wolfpack sent another of his groups in to the archive, The Colts.

Here is a pic from late 70’s early 80’s of a gig at The Reformation which was in the basement of a Hotel ( I think!!) on Needless alley.
I think this was my band The Colts I have an old Brumbeat somewhere with a write up on us.
In the picture is Jill Smith singer and was my girlfriend at the time and Dave Kingdon alto sax. 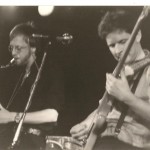 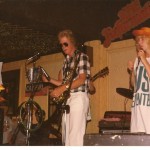