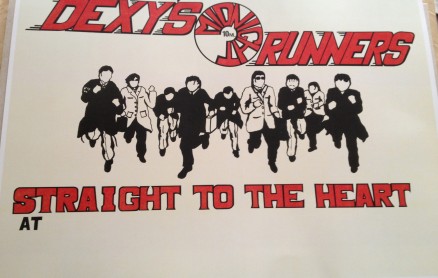 Dexys Midnight Runners are a Birmingham pop group with soul influences, who achieved their major success in the early to mid 1980s. They are best known for their hits “Come on Eileen” and “Geno”.

Kevin Rowland (vocals, guitar) and Kevin “Al” Archer (vocals, guitar) founded the band in 1978 in Birmingham, England, naming the band after Dexedrine, a brand of dextroamphetamine popularly used as a recreational drug among Northern Soul fans at the time. The midnight runners referred to the energy the Dexedrine gave, enabling one to dance all night. “Big” Jim Paterson (trombone), Geoff “JB” Blythe (saxophone), Steve “Babyface” Spooner (alto saxophone), Pete Saunders (keyboard), Pete Williams (bass) and Bobby “Jnr” Ward (drums) formed the first line-up of the band to record a single, “Dance Stance” (1979). The song was released on the independent Oddball Records, and reached only number 40 in the British charts, but the next single, “Geno” – about Geno Washington, and released on EMI – was a British Number One in 1980. It featured the band’s newest recruits, Andy Leek (keyboards) and Andy “Stoker” Growcott (drums).

The band members were disappointed with their share of the profits, and soon stole the master tapes of Searching for the Young Soul Rebels, their debut LP, in order to renegotiate the deal. The album was released later in 1980 and became a massive success. After the next single, “There, There, My Dear”, was a hit, Rowland insisted on choosing the uncommercial “Keep It Part Two (Inferiority Part One)” for the following single. It was a failure, and most of the band members quit, angered over continual personality problems with Rowland. Archer eventually formed The Blue Ox Babes, while Blythe, Spooner, Williams, Stoker and Mick Talbot (ex-The Merton Parkas, who had recently joined on keyboards) left to form The Bureau. Paterson stayed with Rowland, who added Billy Adams (guitar/banjo), Seb Shelton (drums, formerly of Secret Affair), Micky Billingham (keyboard), Brian Maurice (alto saxophone), Paul Speare (tenor saxophone) and Steve Wynne (bass), releasing “Plan B”, “Show Me” (this line-up’s only Top 40 hit) and “Liars A to E” in 1981 without much success.

Rowland then recruited fiddle players Helen O’Hara (from Archer’s new group, the Blue Ox Babes), Steve Brennan and Roger MacDuff, known collectively as “The Emerald Express”. With the addition of new bass player, Giorgio Kilkenny, this line-up recorded Too-Rye-Ay in 1982, a hybrid of soul and Celtic folk, with strong influences from the music of Van Morrison.The first single, “The Celtic Soul Brothers”, was mildly successful but “Come on Eileen” soon followed, and became a Number One hit in both the UK and the United States (and, in the former, the biggest-selling single of 1982). The follow-up “Jackie Wilson Said (I’m in Heaven When You Smile)”, a cover of a Van Morrison tune, also reached the top 5 in the UK singles chart. The band sang this song on the UK comedy The Young Ones. When the band performed this single on the BBC TV music show Top Of The Pops, which was broadcast live, there was an infamous mix-up (or deliberate prank) by the BBC engineers in charge of the background graphics. Instead of a picture of Jackie Wilson, the American soul singer, the band performed in front of a photo of Jocky Wilson, the Scottish darts player.

Feeling that their role in the group had diminished following the arrival of the fiddles, the brass section of Paterson, Speare and Maurice left to form The TKO Horns and recorded an album in 1985 with Howard Jones, while Kilkenny was replaced by Johnny Edwards on bass and Billingham left to join General Public. The group continued to tour until 1983 with a nucleus of Rowland, Adams, O’Hara and Shelton augmented by other musicians.

After a two-year break, Dexys returned in 1985 with the critically panned album, Don’t Stand Me Down, featuring Rowland, Adams, O’Hara and Nicky Gatfield together with various seasoned performers including Vincent Crane (ex-Atomic Rooster), Julian Littman and Tim Dancy (who had been Al Green’s drummer). Rowland at first refused to issue any singles from the defiantly uncommercial album, and by the time “This Is What She’s Like” was released, it was too late to save the album from commercial failure. The group disbanded the following year after a brief return to the charts with the single “Because Of You” (which was used as the theme tune to a British sitcom, Brush Strokes), and Rowland became a solo singer with the release of 1988’s poorly-received album, The Wanderer. Despite spending much of the 1990s suffering from financial problems and drug addiction, Rowland made plans to reform Dexys together with Big Jim Paterson, although these resulted in no more than a solitary TV performance in 1993. Returning once more as a solo performer, Rowland signed to Creation Records, releasing an album of cover versions called My Beauty in 1999, which sold poorly; some sources quote a figure of fewer than 500 copies sold. This was followed by a disastrous appearance at the Reading festival where Rowland was bottled off by a hostile crowd after introducing two strippers who had accompanied him. The demise of Creation Records meant that the planned follow-up album, which would have featured Dexys, was never made.

In April 2003, the group announced that they would be reuniting for a tour. A greatest hits album, Let’s Make This Precious, was released in September 2003, and a successful tour took place in October and November. Two newly recorded songs, “Manhood” and “My Life in England,” appeared on the album and were touted as new singles. Despite airplay on national radio, neither was officially released as a commercial single. During a June 2005 interview on BBC Radio 2, Kevin Rowland announced that Dexys were “back in the studio” and seeking a record deal for a new album.

Special thanks to Keith Law at unsignedcity.com for content.

Ian Jennings who organised the 30th Anniversary event for Searching for the Young Soul Rebels in 2010 has sent me a couple of amazing of pieces Dexys memorabilia.

The first two relate to a gig Dexys played at Romulus on the Hagley Road. Ian has sent the ticket into the archive and an advert promoting the gig. In itself these are brilliant historical artefacts of early Dexys events. What really elevates them is the support band who played that night, Joy Division. 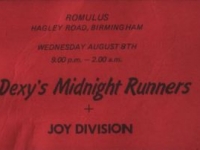 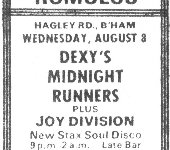 The second item is a truly incredible piece of not only Dexys memorabilia but Birmingham music history. It is one of the very very early flyers for Dexys. Big Jim Patterson designed them, the original was huge, but Ian has rescued one of the very last remaining one from original member Steve Spooner. Ian says that it was in a sorry state but he has cleaned it up and is now producing an extremely limited tun of prints of this brilliantly designed flyer. Big Jim has stated that the 10mls you see in the middle if a reference to the strength of the Dexedrines knocking about in those days.

The design is such a classic soul design with the band members individually drawn on the poster and a space left underneath to add the details of where the next gig was happening. This is a really brilliant and important item.

You really should get a copy! To order one email Ian Jennings: vicferrari4@aol.com! Any Dexys fan has to have this! 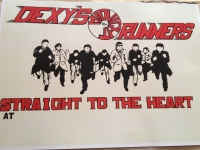