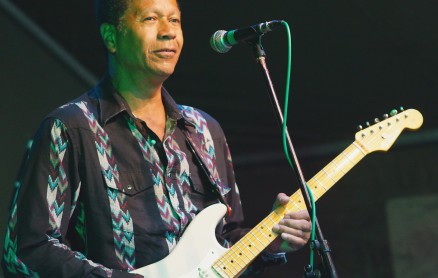 Born in 1952 in Birmingham, England, Steve was brought up listening to his dad playing drums and guitar in 50’s and 60’s.
His father, Bobby Ajao, had a great record collection and Steve was listening to people like Lightnin’ Hopkins, Charlie Parker, Wes Montgomery, T Bone Walker, BB King, Buddy Guy and all the best blues, R&B and jazz at some of his dad’s parties long before the so-called “British Blues Boom” happened in the early 60’s.
Steve started off playing drums, but by the late fifties, when he was just eight, he was given his first guitar, a “Selmer 222”. By the age of thirteen, Steve was playing non-stop and beginning to develop his own style, which was strongly based on Lightnin’ Hopkins. He even managed to fool his dad into thinking some tapes that he had made were actually by Hopkins!
That was enough to persuade Steve’s dad to bring him into his band as lead guitarist. Still just thirteen, Steve was playing soul, R&B and early reggae together with a smattering of blues in black clubs and dances all over the UK at weekends.