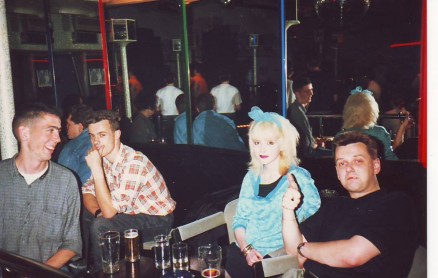 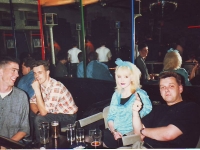 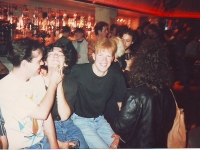 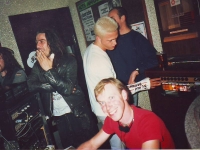 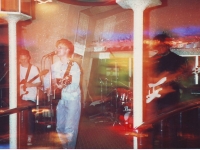 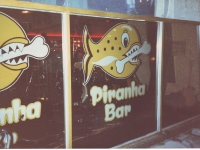 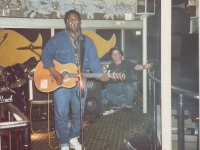 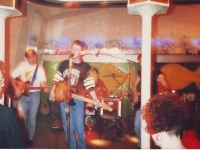 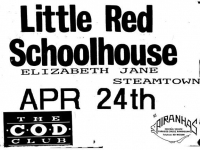 Brilliant club night that hosted the Stone Roses first Birmingham gig. Run by Paul Flower it was next to the old A.T.V. studios in Paradise Circus.

The COD Club ran for an almost perfect, if accidental, 2 years from 13/9/87 to its abrupt end on 20/8/89. The aim was always to establish a regular gig with a high quality threshold every Sunday night whether the acts were local or national, though usually the former.

The venue was based in the shadow of Alpha House beneath and alongside the ATV/Central TV studios in Central Square. On any other day it was The Piranha’s Bar which was ordinarily what you’d now call a pre-club bar – plenty of chrome, mirror balls and more lights than they knew what to do with. There’s more of that in the piece below, written for the Sunday Mercury on the occasion of The Stone Roses reforming.

Though I loved live music I always had to be talked into promoting. I’d previously run The Never Never Club at The Punchbowl in Quinton, Friday nights with exclusively local acts and alongside Frazer Nash who at that point was on BBC Radio WM (as I would be later) and had a cassette format record label. In the case of The COD Club I initially worked alongside Richard Scrase, another media figure and local enthusiast. I can’t recall when we split up but it was early on and due to the fact that I thought I was carrying too much of the load. I sadly haven’t heard from him in years. It was never a one-man project though; Kev & Lloyd regularly manned the door and helped out. Rob and Ian always did the PA and we all hauled the gear across Central Square at the start and end of each night. This was considerably harder than it looked as the below Broad Street/Paradise Circus setting and the presence of Alpha Tower turned the area into a ridiculous wind tunnel. We were often watched in this endeavour by a queue of old people waiting to get into Central TV for the taping of Bullseye. I never saw Jim Bowen but I did once have a football returned to me by the award-winning campaigning journalist Roger Cook. Soundchecks were incredibly boring.

Additional help came from Dave Travis who co-promoted a lot of the bigger, national acts, certainly those who weren’t quite popular enough to play up the road at his (& Steve Coxon’s) Click Club @ Burberries on Tuesdays. Dave handled the financial conversations with agents for The Stone Roses, My Bloody Valentine, The Inspiral Carpets, McArthy, Eat and Leicester’s Crazyhead who I recall not being greatly impressed by Dave’s idea of ‘premium’ lager for their rider. The fact is that we were usually charging under £2 entry and often had less than 100 people in, there wasn’t much money to play with.

In two years we had a veritable parade of talent through the doors and my greatest pleasure was putting together a popular and complementary bill of emerging artists. The names won’t mean much to most but The Rain Devils, The Honey Turtles, The Davidsons, Elizabeth Jane, The Cudgels, Jewel Thieves, Onionhead and Fetch Eddie were recurring performers whilst The Bounty Hunters, Pig Bros, Yeah God and Pavlov’s Dog were always welcome. What was most gratifying is that the acts would come and support each other with half the crowd often comprised of members of other Midland’s bands. The Honey Turtles and their friends from Wolverhampton were more often in the audience than on ‘the stage’ making the long trek on most Sunday evenings. A regular audience was what made it possible and enjoyable, life-long friends and memories were created at The COD.

A good year for the Roses?

Frankly it was a terrible place for a gig. The room was wide instead of long and the stage, if you could call it such, was bang in the middle facing a bar which was no more than 10 foot (or 3 metres if you prefer) away.

The reason I hesitate to call it a stage is that essentially it was no more than a raised seating platform which barely accommodated a full band and at weekends masqueraded as a micro dance-floor. It was also enclosed by chrome bars (see below) which might’ve doubled for a crash-barrier if anyone had been inclined to rush the stage – they never were. Then there was the décor to contend with. Someone had clearly taken the theme of ‘disco bar’ a little too far, every wall was a glittering or reflective surface and the not-high ceiling sported a number of mirrored balls or half-mirrored where there was not enough space for a full version.

This was The Piranha Bar in Central Square, Birmingham and on almost every Sunday for two years from September 1987 it was the home of The COD Club, a venue for live music from local (and not so) bands whose Birmingham/west mids fan-base was not likely to exceed 300 – this being the nominal capacity. Most weeks we never got near that number and on the two occasions we did – The Wonder Stuff/Fuzzbox and Inspiral Carpets/Elizabeth Jane – it was a very tight squeeze. Generally the audience was below 150 but as with everything it is sometimes about the quality rather than the quantity and we had a regular crowd of around 15-20 people who became The COD Club family.

A lot of the detail has escaped me in the intervening years, the result of keeping an incomplete diary or not keeping a complete one. Consequently I have no idea why we chose that venue and how it came about – you can imagine the central Birmingham location had a large part to play but it was probably more important that the licensee gave it to us free of charge as long as we could pull an audience. Sometimes this was harder than it should’ve been.

I was initially dragged back into ‘promoting’ by a chap called Richard ‘Dick’ Scrase, he’d been working at Brum Beat (for whom I also wrote) and then moved to run another local publication. He was very keen. I’d previously promoted local acts – as a labour of love – at a pub called The Punchbowl which (unlike The Piranha) still exists at the bottom of the Wolverhampton Road in Quinton. There were some great bands in the area at that time – Kit Form Colossus, The Wardrobe, Pavlov’s Dog – but it was always hard work.The work eventually did for Dick, that and the fact that he chose to independently put on another gig one Sunday in Birmingham with Martin Stephenson and didn’t see that it was a problem. Eventually I ended up running it by myself with the help of dedicated and unpaid friends like Kev and Lloyd (below in his guise of singer-songwriter) alongside the ever-smiling Rob and crusty-lothario Ian on the PA.

It was the assistance of another promoter, Dave Travis, who co-ran The Click Club at Burberries which led to the COD’s most celebrated and remembered event. The story of Dave’s legacy may be for another time but as we did Sundays he did Tuesdays, with Steve Coxon. further up the road on Broad Street. They had a larger capacity up there and he would occasionally put bands my way if they weren’t ‘big’ enough for The Click. They had a similar back-story, being photographer and writer respectively prior to a very successful run as promoters and I’d frequent their nights as regularly (if not more so) than they would mine. So it came to pass that on November 20th 1988 The COD Club hosted the debut Birmingham performance of soon-to-be Manchester legends, The Stone Roses. At the time they were on the cusp of greatness, Elephant Stone had either just been released or was about to be, they’d just performed a major show at the International in Manchester and they were rocking up to a disco bar on a cold Sunday in Birmingham.

In retrospect it’s surprising that any ‘out of town’ bands didn’t turn and run on sight of their surroundings, in the shadow of the alpha tower and the wind blowing tornado force as you loaded gear across the plaza with the bewildered old folks often queuing outside to get into a filming of Bullseye at Central TV next door. Perhaps they were just relieved to get indoors in spite of the horrifying décor. I guess we were a friendly bunch, a sense of humour was compulsory and we were all putting in the effort – not in the understanding that we were part of something bigger (heaven forbid, a ‘scene’) but because we all believed in the music and that Birmingham needed a place to host great bands – the city had been haemorrhaging venues at that point and if we hadn’t done it, who would?I wish I was able to remember more of the gig, the songs played and the performance itself. This set list http://www.john-squire.com/gig/88-11-19.html from the same tour will probably give an indication. I recall that they were good but with not a major sign of the status and brilliance they would achieve. Perhaps I was distracted, there was always something else to do – whether it was taking money on the door or putting on tracks between the acts.

Of the under-100 people present (83 paid at £2 a ticket) there were a fair number of people from the midlands music scene, people who were clearly more aware of the Roses’ potential. The band themselves were paid £50 for the privilege, I suspect that when next year’s 75,000 capacity Heaton Park gigs take place that fee will be suitably inflated. It may have been the last time they were paid so little money – maybe it explains why they didn’t come back to Birmingham much…….My major recollection of that night was of going to see them in the ‘dressing room’ to check if they were OK or needed anything. The term ‘dressing room’ is about as adequate as the concept of the ‘stage’ at Piranhas, it was anything but. In fact it was a cupboard that more often than not contained cleaning materials, a mop and bucket and various solvents. I add no joke here, it is not needed and I’m not exaggerating for comedic effect either.

I suspect I remember it as most bands rarely used it, being entirely unfit for purpose. The Stone Roses were all sitting in there though, cramped together, smoking. They seemed oblivious to it all and probably unaware of the year(s) they were about to have and how much they were on the cusp of greatness. They were in a cleaning cupboard though so it’s hardly a surprise. A year later the club was closed, a discovery I made at The Reading Festival when I literally bumped into the guy who ran the club upstairs from The Piranha. He told me the owner had gone into receivership and I should go in and get my gear back. Seven years later on the same site The Stone Roses would also call it quits, naturally unaware of the parallel and with a pronounced absence of mirror balls.