Raw Deal was the first band to play at the Mercat Cross.  Members of Raw Deal were Paul Woodward, Guy Dennis, Dave Smaylen, Matt Thorpe and later Gary Smith and I think briefly a guy called Paul (?) Marston (Marsden?) to replace Matt Thorpe after he was electrocuted at the Mercat one christmas eve. At the time we also came second in the Melody Maker Rock Contest finals in Leicester. 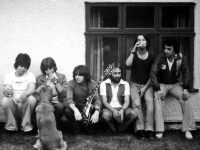