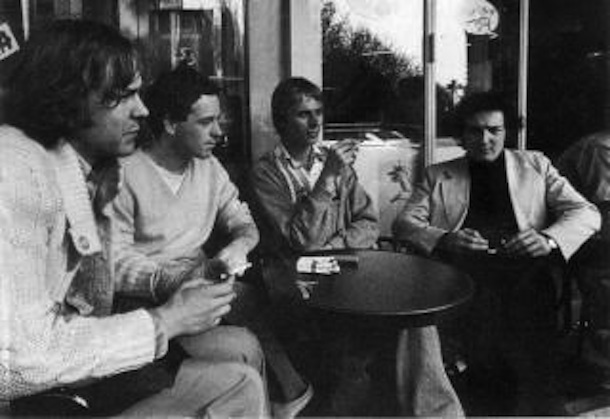 Bachdenkel came to life in and around the King’s Heath area of Birmingham in the late 1960s, evolving out of a combo called “U No Who”.

Their name was produced by computer – an innovative use of new technology in those days – and they were one of the seminal bands on the Birmingham scene during the late 1960s, which saw the development of psychedelic culture and electric rock music. They had close links with the Birmingham Arts Lab, a venue for experimental artists of all types, and often performed with a full psychedelic light show.

Following a publicity campaign which included subverting a large department store’s marketing logo and a photoshoot with a piano in a local fountain, they left the country. They subsequently found themselves in Paris, long the refuge of revolutionary artists and artistic revolutionaries. After the events of May 1968, France was ready for new ideas and new music and English rock bands were much in vogue at the time.

Bachdenkel settled in France and over the next decade went on to produce 2 albums: the first of these, “Lemmings”, is generally regarded as their best. At times in their career, they shared the billing with Led Zeppelin and Black Sabbath amongst others and provided the music for a modern ballet.