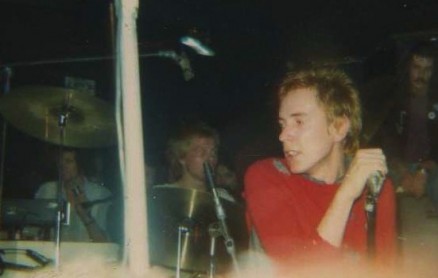 So Paul Apperley, of the local punk legends The Prefects was at the Sex Pistols gigs and has sent us in these photographs of the Pistols on stage. These are, I think, the first time these photos have been publicly shown. These compliment the audio recording below, and capture the energy of the band and the completely different look. Bogarts was a predominately biker and rock club so to be confronted with the Sex Pistols, must have been, shall we say, interesting. I love the bloke sitting on what looks like the PA, and in the second photo, you can just make out part of the Bogarts sign.

As ever, I’d love to hear your memories of this gig. Where you there the night the Sex Pistols played at Bogarts?

Andy Marshall over at the Sex Pistols Archive has just posted another recording from the Sex Pistols gig at Bogarts on 20 October 1976. This is a legendary gig in the history of Birmingham music as it was one of only two gigs the Pistols played in Brum (the other one was at Barbarella’s on 14 August ’76).

We are still after pictures, videos and memories of the gig, so if you were then then please tell us!