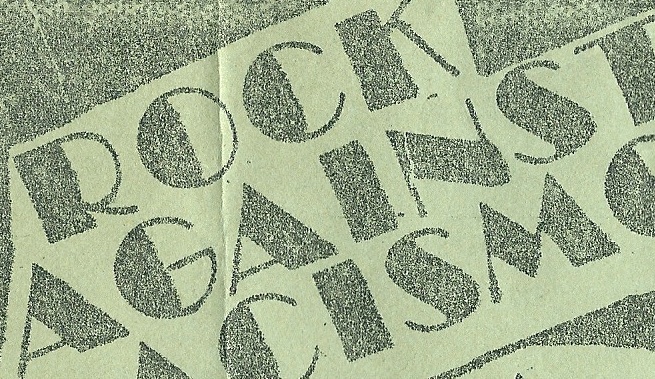 Birmingham has played a central role in the history of Rock Against Racism albeit not a role it may wanted to be associated with. In 1968, the Conservative MP Enoch Powell made his “Birmingham speech’ more widely referred to as the ‘Rivers of Blood’ speech in which he spoke about immigration in the UK. In 1976, Eric Clapton was playing at the Birmingham Odeon when he spoke of his support for Powell and his views. The outburst was captured here:

As a reaction to this, Rock Against Racism was started and of course Steel Pulse played at the now legendary Victoria Park event in 1978.

The coordinators of Birmingham RAR were Annie Bearfield and Cynthia Woodhouse ( now deceased). Cynthia and Annie ran a RAR club at Digbeth Civic Hall and at other places across the city, such as The Star Club and The Mermaid. Barry Coleman did a lot of the art work for posters which were printed at SPAM, Saltley Print and Media.

Rock Against Racism (RAR) was a campaign set up in the United Kingdom in 1976 as a response to an increase in racial conflict and the growth of white nationalist groups such as the National Front. The campaign involved pop, rock, Punk Rock and reggae musicians staging concerts with an anti-racist theme, in order to discourage young people from embracing racist views. The campaign was founded, in part, as a response to statements and activities by well-known rock musicians that were widely regarded as racist.

Originally conceived as a one-off concert with a message against racism, Rock Against Racism was founded in 1976 by Red Saunders, Roger Huddle and others. According to Huddle, “it remained just an idea until August 1976” when Eric Clapton made a drunken declaration of support for former Conservative minister Enoch Powell (known for his anti-immigration Rivers of Blood speech) at a concert in Birmingham.[2] Clapton told the crowd that England had “become overcrowded” and that they should vote for Powell to stop Britain from becoming “a black colony”. He also told the audience that Britain should “get the foreigners out, get the wogs out, get the coons out”, and then he repeatedly shouted the National Front slogan “Keep Britain White”.

Huddle, Saunders and two members of Kartoon Klowns responded by writing a letter to NME expressing their opposition to Clapton’s comments, which they claimed were “all the more disgusting because he had his first hit with a cover of reggae star Bob Marley’s “I Shot the Sheriff” … Come on Eric… Own up. Half your music is black. Who shot the Sheriff, Eric? It sure as hell wasn’t you!”. At the end of the letter, they called for people to help form a movement called Rock Against Racism, and they report that they received hundreds of replies.

Clapton later claimed that his remarks were made as a joke, and that he did not know anything about politics at the time. In a 2007 interview, however, he said he still supports Powell, and that he doesn’t view Powell as a racist.

Further support for RAR came after David Bowie, speaking as The Thin White Duke, his persona at the time, made statements that expressed support for fascism and perceived admiration for Adolf Hitler in interviews with Playboy, NME and a Swedish publication. Bowie was quoted as saying: “Britain is ready for a fascist leader… I think Britain could benefit from a fascist leader. After all, fascism is really nationalism… I believe very strongly in fascism, people have always responded with greater efficiency under a regimental leadership.” He was also quoted as saying: “Adolf Hitler was one of the first rock stars” and “You’ve got to have an extreme right front come up and sweep everything off its feet and tidy everything up.” Bowie caused further controversy by allegedly making a Nazi salute while riding in a convertible, although Bowie has always strongly denied this, insisting that a photographer simply caught him in the middle of waving. This claim seems to be borne out by existing footage of the event.

Bowie later retracted and apologised for his statements, blaming them on a combination of an obsession with occultism, the Thule Society and Friedrich Nietzsche, as well as his excessive drug use at the time. He said: “I have made my two or three glib, theatrical observations on English society and the only thing I can now counter with is to state that I am NOT a fascist.”

RAR’s first activity was a concert featuring Carol Grimes as lead artist, and it also launched the fanzine Temporary Hoarding.[citation needed. In spring 1978, 100,000 people marched six miles from Trafalgar Square to the East End of London (a National Front hotspot) for an open-air music festival organized by RAR and the Anti-Nazi League, to counteract the growing wave of racist attacks in the UK. The concert featured The Clash, Buzzcocks, Steel Pulse, X-Ray Spex, The Ruts, Sham 69, Generation X and the Tom Robinson Band. There was a second march and concert at Brockwell Park in south London, featuring Stiff Little Fingers, Aswad and Elvis Costello. In autumn of the same year, an audience of 25,000 came to the Northern Carnival in Manchester, for a concert featuring Buzzcocks, Graham Parker and the Rumour, and Misty in Roots. In 1979, a concert was held at Acklam Hall in London, featuring Crisis, The Vapors and Beggar.

The group behind the original Rock Against Racism launched a new website on April 27, 2008.

RAR was reborn in 2002 as Love Music Hate Racism, with a concert at The Astoria in London, England featuring Mick Jones, Buzzcocks, and The Libertines.[citation needed] Other acts involved in the campaign include Ms. Dynamite and The Eighties Matchbox B-Line Disaster. With a goal of counteracting the activities of organizations such as the National Front and the British National Party, it has held high-profile concerts in Trafalgar Square and Victoria Park as well as some other stadiums and venues. 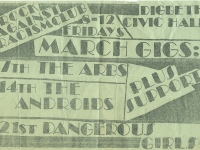 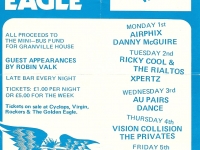