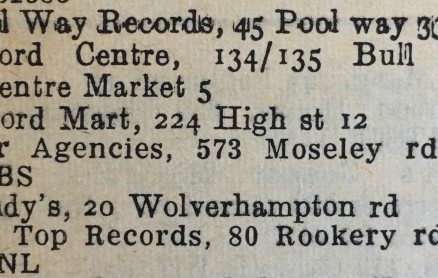 So we stumbled on another ‘Record Centre’ whilst researching, with (current) evidence of it being open between 1967-1974, so we wondered if it had any connections with Ray Purslow prior to him opening his ‘The Record Centre’ in Loveday Street.

This is what Ray came back with:

“Re the Bull Ring Shopping Centre, the only stall I can vouch for was run by Dot who lived at Symons Yat (and her very attractive daughter on Saturdays only), that sold a mixture of Deletions, Overstocks and New Releases at discount prices. It was owned by Midland Records who had a large warehouse near Lichfield and also had a shop in Walsall under the name of Sundown Records (I think that was the name). The date [we gave Ray 1974 in our email] is approximately correct, but could have been a little earlier until at least up to 1976 when I opened my shop. I used to visit and purchase from there almost every Saturday after leaving work (at Birmingham Box). I bought at least a dozen of those wonderful RCA Bluebird Vintage Jazz albums i.e. several Waller, Morton and Ellingtons, plus Johnny Hodges, Henry Red Allen, King Oliver etc, all at only £1.00 each. I’ve still got a few of them, as they have great sleeve-notes with full discographical details and were great transfers and excellent pressings done by Decca who had just ended their licensing deal, dictating clearing their stocks. A little while later Decca lost the USA MCA recordings to EMI. This resulted in all their Ace Of Hearts & Coral albums being dumped at low costs too. Great times for building a jazz collection which was my intention. Great memories.”