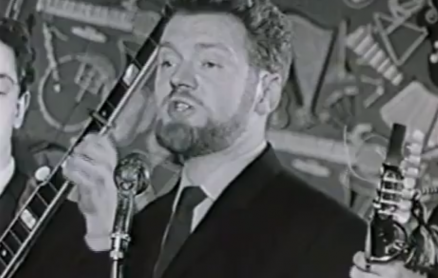 It was with sadness that the Birmingham Music Archive  learned of the passing of Ian Campbell yesterday (Saturday 24 November). Ian, along with is sister Lorna and his Folk Group were part of the British Folk Revival in the 6os and were central figures in the vibrant folk scene of Birmingham. Responsible for the first ever live recorded folk album ‘Ceilidh At The Crown’ in 1962.

Following this, they switched their folk club to the Digbeth Civic Hall where they started what was to become the largest Folk Club in England – The Jug O’Punch. At the Jug they performed and played host to luminaries such as Liam Kelly, later of the Dubliners, Joni Mitchell and Paul Simon as well as local and national folk performers. Ian’s group was also home to Britain’s greatest fiddle player Dave Swarbrick and the great guitarist Dave Pegg, both of whom would go on to join Fairport Convention.

Fiercely political, Ian remained true to his Scottish and socialist roots throughout his life and never lost the love of playing and interpreting ballads and folk songs live on stage, and it was this environment where his music really came to life.

Condolences to Lorna and his sons Duncan, Robin, Ali and David.

Below is some amazing footage Ian gave to the archive last year of the Ian Campbell Folk Group playing at The Jug O’Punch, we never got to complete the film but it is a fitting tribute to this wonderful person and Folk great.