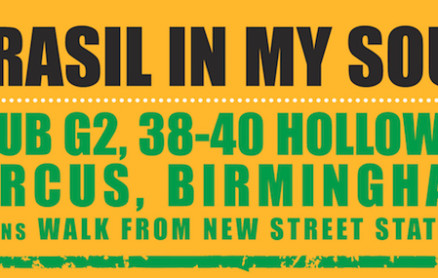 Brasil Na Minha Alma (Brasil in my Soul) launched a regular night of Brasilian music with a fund raising event for ‘Street Angles UK’.  The launch night took place in November 2003 and was spread over two floors with traditional sounds in the main room whilst Brasilian jazz and electronica was played upstairs, together with various dance classes over the evening.

Head to Brazil for a fusion of beats

“It’s a big world out there and how often we forget it, safe, for the most part, in our Anglo-American cultural bubble. Caipirinhas at the ready, then, as this Saturday’s Brasil Na Minha Alma (Brasil In My Soul) night aims to open eyes and ears to the myriad offerings emanating from this fascinating South American country.

The first in this series of monthly events took place in November and it’s slowly building a loyal following of South American ex-pats and Midlanders keen for some exotic thrills. The man behind the nights is promoter Brian Parsons. In the words of G2’s manager, Errol Bernard, `Brian has been influential in bringing world rhythms, such as those from Brazil, Cuba and Africa, into Birmingham.’

There’s certainly an appetite out there. ‘It’s been going down really well,’ explains Bernard. ‘They almost drank us out of everything at the first one!’ One of the reasons could be the range of things on offer: live percussion combines with DJs playing the most danceable Brazilian music and, from 8pm to 10pm, workshops in salsa, form and dance/martial-arts crossover capoeira get people in the mood, with some chances to practise a little Portuguese. ‘The dance classes really warm people up,’ says Bernard, ‘so as soon as the DJs come on, people are straight on the dance floor.’ To get punters into the party mood, G2 will become a little part of Rio De Janeiro for the night. ‘The venue gets decorated with sashes and drapes, slides, visuals from Carnival, Brazilian flags,’ explains Bernard.

It’s not just a chance to get wasted on Cachaça, either; a portion of G2’s profits from Brasil Na Minha Alma will go to Street Angels, a British-based charity that provides aid to communities in the north-eastern city of Salvador, funding schools, helping street children and providing sexual healthcare for women. ‘For the first one back in November, they managed to raise £700,’ says Bernard. ‘We’re looking at how we can build on that.’ Brazilian music is a fusion of rhythms and beats from all sorts of places, and this pleasing musical mish-mash is one of its intrinsic attractions. Almost professionally cosmopolitan now, G2 is also embarking on a run of other world music nights: Afrique Meets Bongo-Go on the first Saturday of the month has pan-African rhythms, the last Saturday has global soul and nu jazz at Neo and a new Northern Soul and ska night starts on in February.” 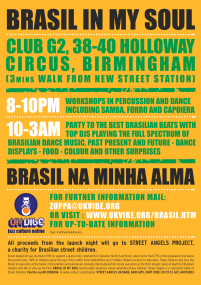 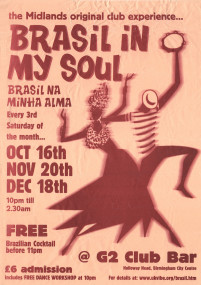